Surrounded by mountains, pristine beaches and crystal clear water, Dominican Republic South Coast is a veritable playground for the adventurous traveler. Outside of the city are hidden lakes to swim in, waterfalls to find and mountains to climb.

Cathedral of Santo Domingo
Despite all this, when the Europeans landed in the island, it was already inhabited by other settlers.  Indigenous people had divided the lands of the island into five chiefdoms, capturing their culture on them by means of art and tools, which you’ll be able to contemplate in the numerous museums of the area. If you are interested in Pre-Columbian history, you’ll enjoy it especially in the permanent and temporary exhibitions of the Dominican Man Museum, National Museum of History and Geography, Hall of Pre-hispanic Art and Los Tres Ojos (The Three Eyes).
It is currently the 10th most populated city in Latin America, and the first one in the Caribbean. It is one of the largest cultural, economical, political, commercial and industrial centers in the Dominican Republic. Moreover, its city center, known as Ciudad Colonial or Colonial City, was declared World Heritage Site by Unesco in 1990.

Not only will you be able to see buildings and artifacts made by men; but in Santo Domingo you’ll also contemplate nature in all its splendour. Visit the gorgeous Botanic Garden, the zoo or the incredible Aquarium, or stroll around any of the countless parks of the Dominican capital city. In the East Viewpoint Park you’ll find the typical vegetation and fauna of the area, as well as Pre-Columbian art in its caves. You can also have a refreshing bath at any of the beaches near the city. Boca Chica Beach, Caribe Beach and Guayacanes Beach are waiting for you with their fine-grained sand and warm Tropical waters.
At night you won’t be able to avoid dancing to the rhythm of Caribbean music, tasting its cuisine or participating in the traditional festivities that the city offers in many of its events throughout the year.
Santo Domingo is an incredible city made up of history, culture and tradition that you shouldn’t miss while travelling to Dominican Republic

In the Trenecito Colonial (Chu Chu Colonial) Little Train you’ll be able to take a walk around the various streets of the city center and contemplate its architectural wealth.
In this same city, you’ll be witness of the passing of time over different buildings, streets, squares and parks. Stroll down hundred-year-old streets and contemplate the different Colonial houses and fortifications that keep the charm of previous centuries, both on their facades and inside. Admire the numerous religious temples enduring the hardships of years and weather. Visit small churches like the Church of Nuestra Señora del Carmen, or some more stunning ones like El Templo de las Mercedes Temple. Behold the Primada de América Cathedral and travel to the origins of Christianity in the New World.
The inhabitants of Santo Domingo have many reasons to be proud of their country but, above them all, stand the struggle for independence. That’s why there are numerous monuments, buildings, parks and museums in honor of those who fought for it. Visit the Independence Park, with the The Count’s Gate and the Altar de la Patria (Altar of the Homeland), or the Plaza de la Misericordia Square, where Independence was proclaimed. Discover how it was forged in the Trinitarios House, or where its main responsibles lived, as in the Casa Duarte Museum. Visit the Memorial Museum of the Dominican Resistance to discover more about that troubled time.e wonderful contemporary Dominican art.

isit the popular Boca Chica Beach just 30 km away from Santo Domingo in the South of the Dominican Republic.

Boca Chica Beach
© Turismo RD
Known as the beach of the city of Santo Domingo, Boca Chica Beach is located in San Andrés Bay, which is just 30 km away from Santo domingo, in the eastern part of the Dominican capital.

Discover this amazing fine and white sand beach where every weekend a multitude of people gather, looking for a beach day in the refreshing tropical waters of the Caribbean. It is one of the most family-oriented beaches in the area, since the water is not very deep and the bottom is sandy.
It is a very famous beach where you can find hawkers who sell from massages to seafood and necklaces. It also has a great variety of restaurants where you can taste dishes from the national cuisine.
This is a wonderful place to sail and discover the beauty of Santo Domingo’s tropical coast and sea. Just 400 meters away from the coast, a coral reef with the shape of a semi-circle goes all over the beach, which is why the waters arriving at the shore are so calm.

Your vacation in the Dominican Republic is sure to consist of plenty of fun and excitement, but how about adding a touch of adventure as well? For those who can’t shake that adrenaline bug, consider booking exciting excursions, such as zip-lining, setting sail on a catamaran cruise or snorkeling and diving, to make the most out of your destination.

Over 200 beaches—many of which remain uncrowded and undeveloped—line the Caribbean and the Atlantic coastlines, ranging from a brilliant white to a handful of black sand beaches.

Saona’s picture-perfect beaches attract more visitors than all of the DR’s national parks combined. A protected site and part of Cotubanamá National Park, the island is a dream tropical escape.

Celebrate your romance with a destination wedding in the Dominican Republic. Romantic weddings on a sand beach, rich sunsets and some of the most beautiful beaches in the world are the perfect backdrop for your destination wedding.

Your bachelorette/bachelor party can be the most fun you’ve had in years! With a bit of planning  beforehand, the Dominican Republic is the perfect spot to plan such an adventure.

A rededication to your marriage is an exciting thing – you can do it as often as you like. With vow renewals (or reaffirmations) you have the opportunity to have the ceremony you’ve always wanted.

Paddle boarding is undoubtedly a great way to get in contact with the land and marine environment in the Dominican Republic. Easy to learn and a sure way to have great fun in the Caribbean Sea.

Sea breezes and  the most beautiful beaches in the world. Dominican Republic is the perfect location for sailing and learning to sail. Bask in the sun and enjoy the unbelievable sunsets.

Considered one of the top islands for snorkeling in the world, the crystal-clear waters of the Dominican Republic offer an incredible experience for novice and expert alike.

Explore the depths among the colorful coral reefs that are home to anemones, eels, giant stingrays, sharks and turtles.
If you bring the whole family, try snorkeling in shallow water perfect for the little ones.

If you love sportfishing then we have the trip for you! Troll for sailfish, blue marlin, white marlin, wahoo and dorado in the teeming waters of the Caribbean Sea!

Big attraction for anglers heading to the Dominican Republic is unquestionably saltwater fishing. Thanks to her fantastic deep waters surrounding the coastlines, sport fishing for highly sought after big game species is incredibly popular.

Golf by the Sea

Renowned for having the most magnificent golf courses in the Caribbean region, and Latin America, the Dominican Republic is the undisputed leader of golf in the tropics. Dominican Republic’s award-winning courses are on every golfer’s bucket list.

At least seven of the Dominican Republic’s courses have consistently topped Golf Week Magazine’s Top 50 courses in the Caribbean and Mexico, including Punta Espada in the top 10.

Horseback riding is deeply entrenched in Dominican culture, going back centuries to colonial Spanish times. Ride horseback along the hills, and colorful villages of the Domincan Republic in any location countrywide.

Rugged mountain terrain and hidden treasures, create the perfect setting for an off-road  adventure. Drive your own ATV through countryside full of surprises and new adventures.

Looking for Lifestyle Options? Considering the Dominican Republic as a place to live or retire, the knowledge we share will help you to create a plan, and we’ll connect you with useful lifestyle services and property choices.

Many consider the Dominican Republic for their retirement home. With recreational opportunities such as boating, fishing, swimming, snorkeling, scuba diving, sailing, kayaking and a modern infrastructure, stable electrical grid and high-speed internet.

Variety of lifestyles, from resorts, condos and other full-time housing—it’s a perfect place for those seeking an “always on vacation” lifestyle. Dominican Republic has everything you need and more, affordability, healthcare, safety, culture and cuisine.

Opportunities for real estate investment exist in the Dominican Republic for entrepreneurs. Beachfront and ocean view houses and private land that lie close to the attractive vistas that line the coastline.

It is always a wonderful idea to set up villas, apartments and other residential units in the vicinity of a stunning ocean, pristine beaches, and picturesque lagoons. The attractiveness of the Dominican Republic has always been a magnet that attracts buyers and tenants at any time of the year.

In 1492, Christopher Columbus landed in the Dominican Republic and promptly claimed the island for the Spanish crown. A year later, Santo Domingo had become the first European settlement in the New World, and the Spanish influence that still dominates had begun.

There is no better place to immerse yourself in authentic Caribbean culture. The Dominican people and their customs have predominately European cultural origins with both African and native Taíno influences.

Dominican Republic is well known for its varieties of regional and national food and drink. From street food to exquisite culinary delights, paired with regional beverages, beer and rum with long histories and international reputations.

The most popular Dominican drink – Mamajuana. Mamajuana is a potent drink native to the Dominican Republic that is purported to have strong medicinal qualities. 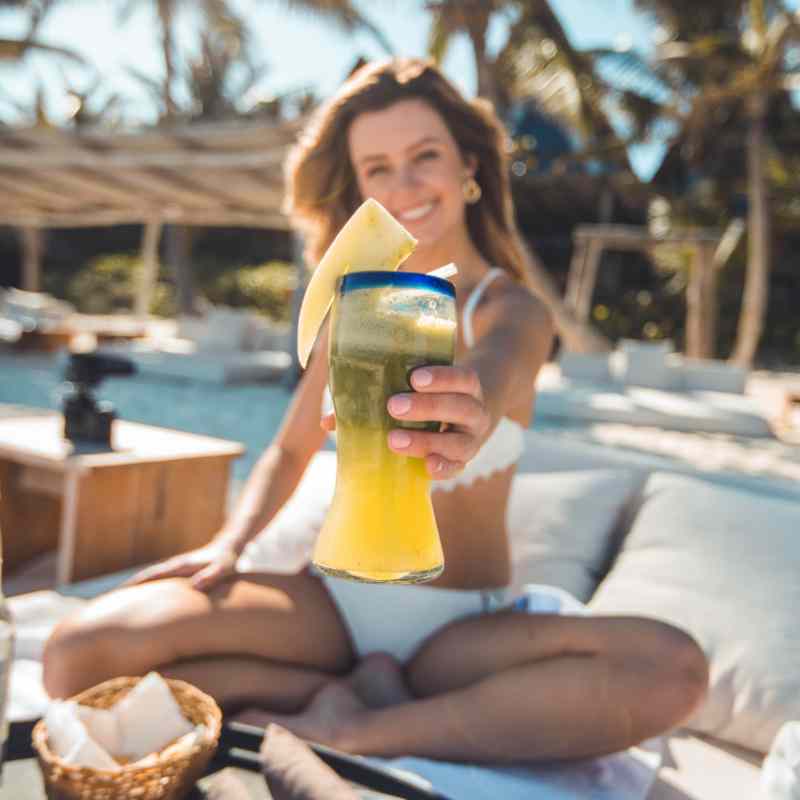 A handful of beers are made in the Dominican Republic, including craft beers found in a few places around the country. The most popular brand is the world famous Presidente beer, made by Cervecería Nacional Dominicana since 1935.

Dominican rum is produced by several big brands, the most popular two being Brugal and Barceló. Ron Bermúdez dates back to the 19th century, with white and golden premium varieties.

If your idea of recreation is a healthy dose of relaxation, Dominican Republic offers world-class amenities with old Caribbean charm. Along with unlimited experiences on land, on the sea and in the sea, DR has you covered.

As a traveler in Dominican Republic you can enjoy a full array of spa services, fine regional dining or sunning yourself at the beach or by the pool. Dolphin and whale watching expeditions are an extra special vacation treat not to miss.

Taste of the Carribbean

Latest from the Blog

Magical, historic, cultural, intimate – these are but a few of the words that best describe the balmy and magical escape that is Dominican Republic.

Located in the Caribbean Sea. A lush, tropical environment welcomes you with open arms,

with her lush jungle hillsides making way for sandy beaches, a setting that just begs for outdoor adventures and lazy days by the ocean.

A Special Thanks to All Our Sí Destinations